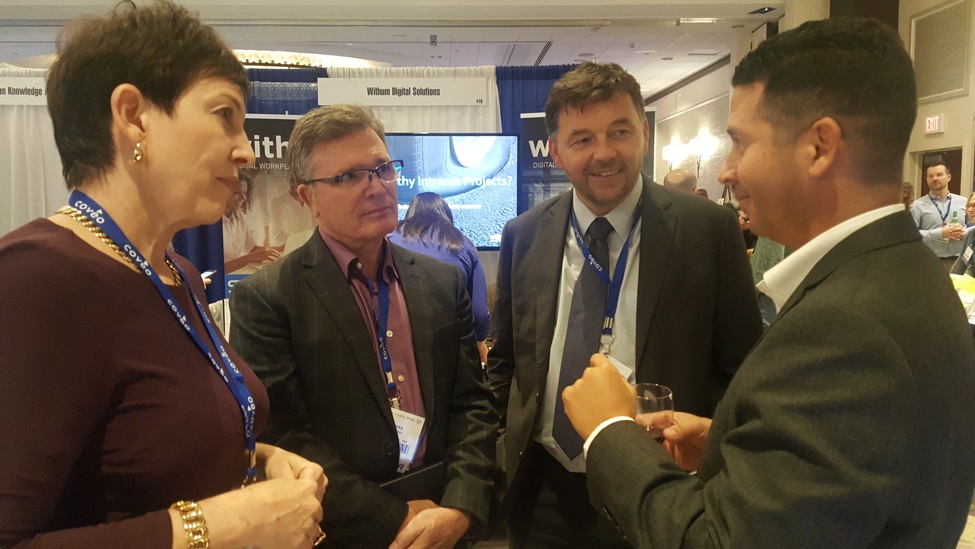 Last week I attended the KMWorld conference in Washington DC with our crew from Colligo, Loic Triger (COO) and Tom Ng (Manager of Services and Community). Billed as the “World’s Leading Knowledge Management Event” the conference brings software vendors, consultants and customers together for four days to discuss the current state and future of knowledge management. The conference also included a SharePoint Symposium.

This year’s event was in Washington D.C. and Colligo was there exhibiting with our partner NEOSTEK, who focuses on customers in the U.S. Federal government.

Buzz Around the Conference 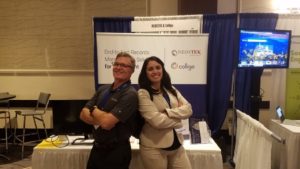 One of the great things about the conference is the opportunity to share stories, and learn about best practices from peers in the industry during breaks and meals. I was fortunate to be able to discuss the current state of knowledge management with some of the best.

A few things stood out. The first is the critical importance of search for effective knowledge management. The advances in search technology combined with AI were really inspiring. Loic and I had a lively discussion with Jeff Fried, CTO of BA Insight, who was a speaker at the conference. BA Insight have married SharePoint search with AI into a unique concept called Cognitive Search. Apparently BA Insight are making some waves as I heard a few people buzzing about Jeff’s presentation.

One of the more interesting keynotes talking about search innovations was given by Naomi Moneypenny, Senior Product Manager for Enterprise Search and Discovery and Social Intranet at Microsoft. She talked about the critical importance of Microsoft Graph to providing insights to Microsoft 365 users and connecting users across the enterprise in new ways. I was pleased to hear that Microsoft is starting to integrate its LinkedIn acquisition closely into Office giving access to users profile cards in applications like email. Naomi said this is just the tip of the iceberg; we can expect Microsoft to leverage LinkedIn more heavily in the future. 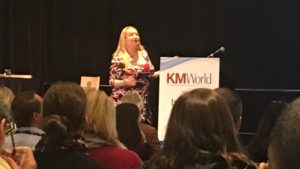 Naomi also talked about new capabilities coming for searching images, called visual content intelligence. Based on the Azure Custom Vision Service, this is a powerful capability to train the search service to classify images that are being stored in Microsoft 365.

Speaking about Microsoft, Sue Hanley, a consultant, author and Microsoft Office Servers and Services MVP, gave several presentations at the conference. Sue is a real thought leader and dynamo who seems able to balance a successful consulting career, speaking engagements all over the world, and a busy home life. I attended Sue’s talk: “Lions and Tigers and Teams, Oh My!”. In this presentation, Sue took on the daunting task of sorting through all the Microsoft Office technologies in an effort to help the audience to understand when to use each of them most effectively. I can’t do it justice in a short summary like this, but her analysis is based on breaking down people you collaborate with into two groups: inner and outer loops. She then discussed which tools are more appropriate for each of these. So, for example, Sue says that Microsoft Teams is ideal for collaborating with the Inner Loop while Yammer is best for the outer. 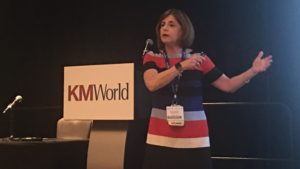 I also had the pleasure of attending the KM Leaders dinner organized by Sue Hanley and KM pioneer, Stan Garfield. About 50 people in the KM space from all over the world were there to exchange ideas over a great meal. The topic was knowledge management leaders that we admired most. My pick was our customers! Especially the digital workplace heroes who go out on a limb to challenge the status quo and get new things implemented in their organizations, even if it means swimming upstream. After that we shared stories and one of the common themes was the importance of building a strong taxonomy in the enterprise, a topic near and dear to Colligo’s heart. Several of the people around the table had degrees in Library Science and I gained a real insight into how these people are helping their organizations to think differently about how to organize and leverage information.

As mentioned, the conference was held in D.C. so naturally a lot of the speakers were from the U.S. Federal Government. I attended a few given by the U.S. military. A couple of knowledge managers from the Army presented on how the U.S. Army is approaching knowledge management. Imagine supporting a user population in excess of 100,000 that needs mission critical information at a moment’s notice. It’s a daunting task! 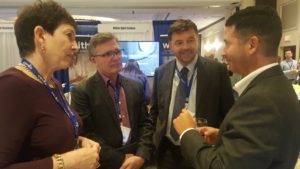 We had the pleasure of spending quite a bit of time with Lieutenant Colonel Alberto Rodríguez Cruz, Chief Knowledge Management, U.S. Army Pacific Command. It was fascinating to hear the challenges that he and his team have overcome to implement KM.

What stood out for me in both of these presentations was the extensive use of SharePoint throughout the U.S. Military. They are leveraging the power of the platform just like many organizations in the commercial world.

While email remains the number one communication method, I was surprised to see how little airplay it received at the conference. Most presenters discussed the importance of documents and the need to effectively manage them as part of a KM strategy. But when asked how emails are managed, most people just shrugged. About the best people could muster was an email retention policy that’s carried out through mass archival of emails.

It was interesting to see that most KM managers recognize the importance of transferring knowledge from retiring employees to new ones. One of the talks I attended was by Molly Russell of the National Parks Service who addressed how NPS does knowledge transfer to new employees by implementing a thorough methodology that all employees go through when they leave the organization. The results of this were clear: shorter time to get new employees up to speed and better decision making. But, again, this was document-centric and didn’t include a policy around emails.

Antiquated email policies seem to be driving these issues. For example, the U.S. military does not require that emails are retained for service members below the rank of general officer; essentially no one except the executive has their emails retained by the department they are leaving. And they don’t have any way of sharing the emails either, despite the fact that they actively use SharePoint for managing and sharing documents. When people leave the organization—something that happens very frequently in the military—their emails go with them. And so does the knowledge contained in them. I could see that this was a point of frustration for the knowledge management folks.

Despite the fact that the vast majority of organizations are using SharePoint, it’s a surprise that they aren’t using it to manage email. This trend was highlighted in the recent AIIM study as follows:

“Given all of the attention placed these days on the content contained within email messages, one would think that email management would be a major focus, yet 76% of our respondents say they do not use email management. When you look at the integration capabilities of SharePoint with Outlook, both out-of-the-box and through third-party add-on applications, this should be an easy decision to make in an effort to gain greater control over correspondence and minimize risks.”

When asked, I often heard that the main reason for this is that emails are often managed by a different organization than those who are responsible for knowledge management. Email is managed by people in IT, while KM is part of the business. This needs to change if organizations are going to leverage the power and risks associated with knowledge contained in emails.

Taking it to the Next Level

I want to thank the organizers for putting on a tremendous event. Thanks also for the opportunity our team had to present alongside NEOSTEK: if you missed our talk at the SharePoint Symposium, then you might want to check out our new case study in which we helped a U.S. Federal Government agency save over $4 million in annualized costs in responding to FOIA requests.